The rise and rise of livestreaming at motor shows

At PFPR we have been monitoring PR activity at the major European motor shows for more than seven years. In the process, we have identified a number of communications trends and technology growth areas that we now use to shape the communications strategies we develop for our clients.

During this time, we’ve seen livestreaming become an increasingly important component of car manufacturers’ motor show output. Most recently, we have witnessed increasing numbers of brands opting to livestream their press conferences to audiences around the world – with varying degrees of success. 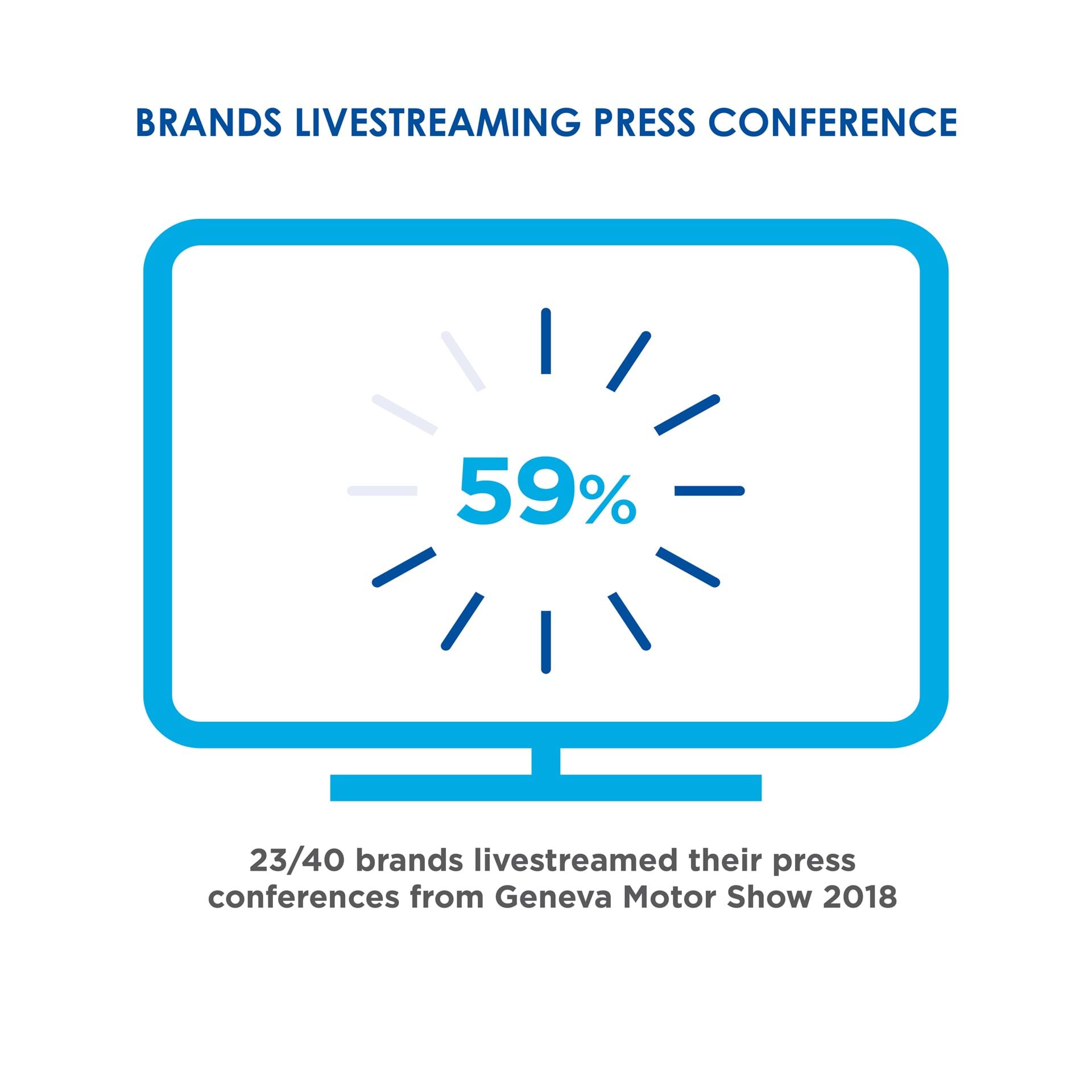 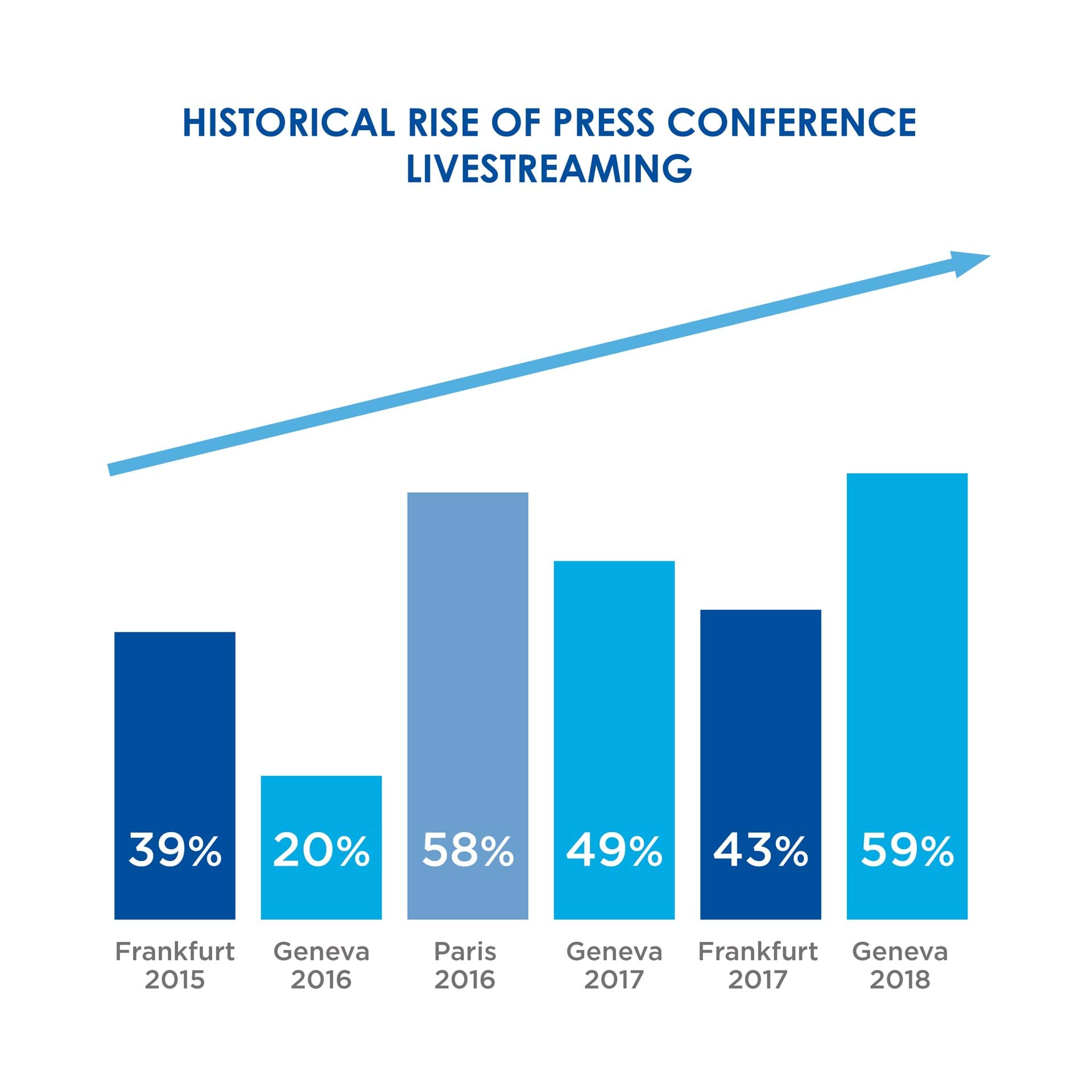 At the 2015 Frankfurt Motor Show, just 39% of brands with press conferences chose to broadcast them live via the internet. Fast-forward three years to the 2018 Geneva Motor Show, and 59% opted to boost the reach of their event through one or more digital channel – the highest percentage of brands we’ve seen livestreaming their product launches at a major European motor show. 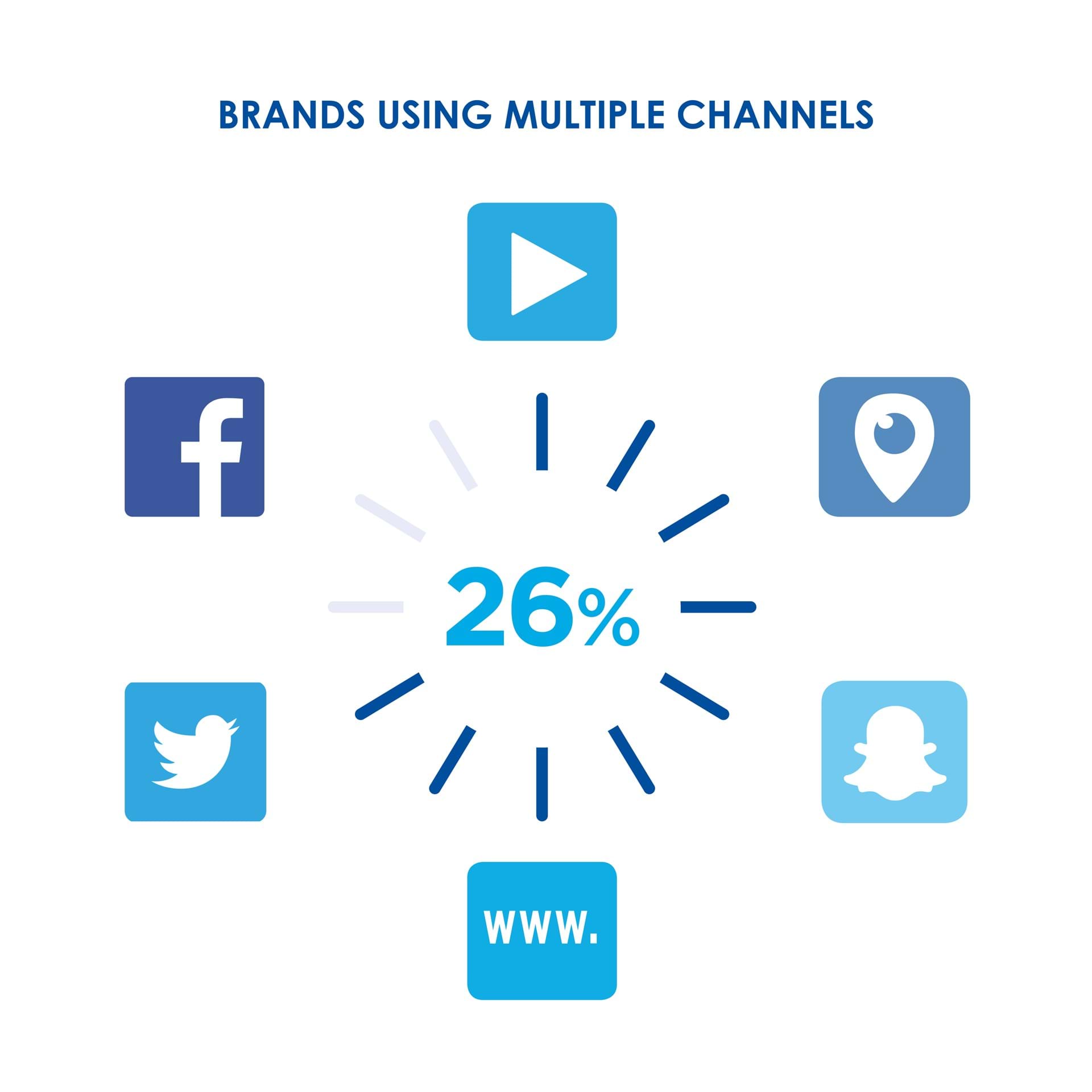 The most used channels at the 2018 Geneva Motor Show

Anticipating an all-time high percentage for livestreaming, we settled down to watch every live press conference broadcast at the 2018 Geneva Motor Show to see which channel proved most popular. The data we collected gives us insight into the total viewing success provided by each channel, and how a combination of channels often provides the best results.

Of the brands livestreaming from Geneva, 26% used more than one channel. Of social media, Facebook was the most popular, with almost three quarters of brands broadcasting over Facebook Live.

YouTube was the next most-popular social channel, with 26% of brands streaming through its YouTube Live service – a substantial reduction from the 63% using YouTube to broadcast live from the 2017 Frankfurt Motor Show six months earlier. 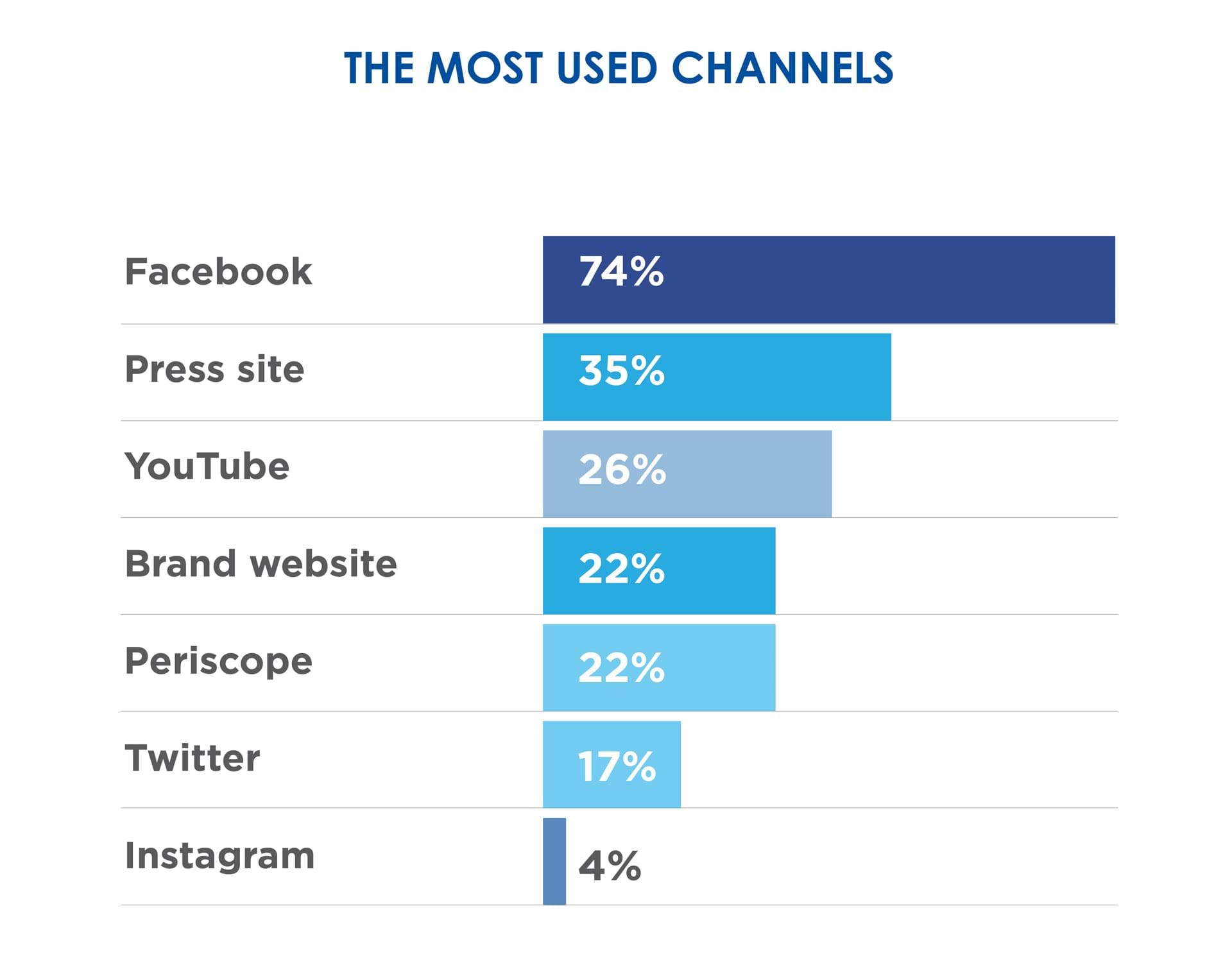 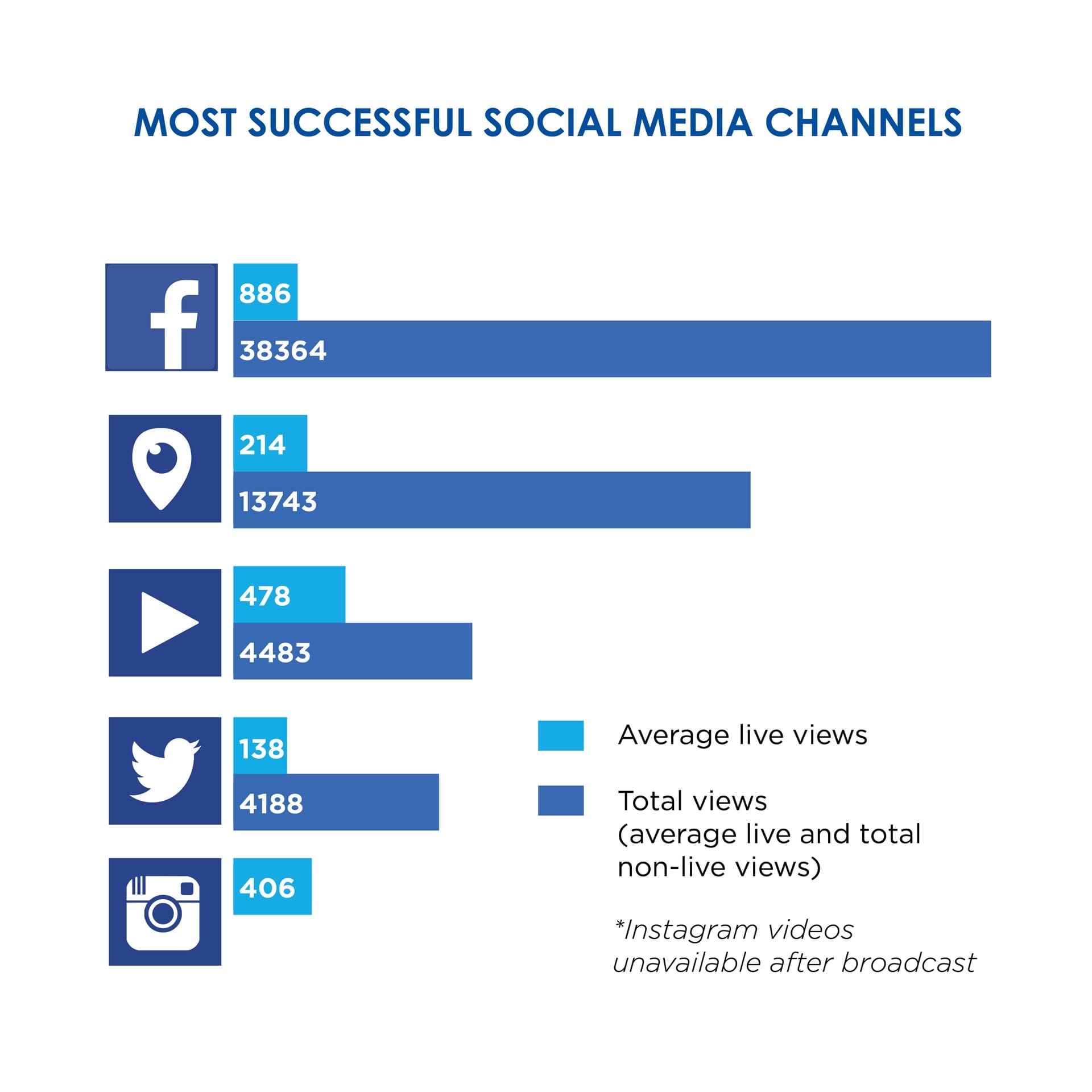 The most successful social media channels at Geneva 2018

A quarter of the manufacturers livestreaming at Geneva opted to use Twitter’s Periscope service – but YouTube proved to be twice as effective in gaining live views, and three times as effective when considering total live and non-live views together.

In all, 87% of brands made their livestreams watchable after the event – with the Facebook and YouTube platforms clearly better suited to hosting non-live coverage.

In total, there was a 3,442% increase in views when content was still available online after the event (at the time of researching). Instagram is excluded from this, as it does not offer an ongoing hosting service.

Why it pays to use more than one channel

Our research shows that it pays for brands to use more than one service to live broadcast their press conferences. For example, we found that using just one extra channel could increase total views by up to a third.

We also found that brands which increased the number of broadcast channels used from one to four could boost their total views, on average, by 234%.

The range of channels used has fluctuated as social media fads come and go – most notably the rise and recent fall of Snapchat as a potential platform for manufacturers to reach new audiences.

Meanwhile, the popularity of Periscope continues to grow, following a fallow year in 2016 when the Twitter-owned video broadcasting service was still in its infancy. Back then, a general lack of enthusiasm for livestreaming and the growth of Facebook Live also tempered an early spike in popularity in 2015, as some brands tested the water with the newly established platform.

While Facebook Live continues to reinforce its leading position, YouTube’s popularity for livestreaming appears to be falling, highlighting why the savviest brands are spreading their bets over multiple platforms. Livestreams to press sites are also declining in popularity as social media becomes strategically more important, but they still play an important role in hosting footage for viewing by media after the event.

In recent years we have also witnessed a marked increase in the number of brands creating live productions to augment their press conference livestreams. From interviews with key executives to live car-walkarounds with celebrity presenters, these additions can be useful for reinforcing the key messages made in the main press conference.

Interestingly, 43% of the longer productions were accompanied by live music – which made no discernible difference to the success of their show. 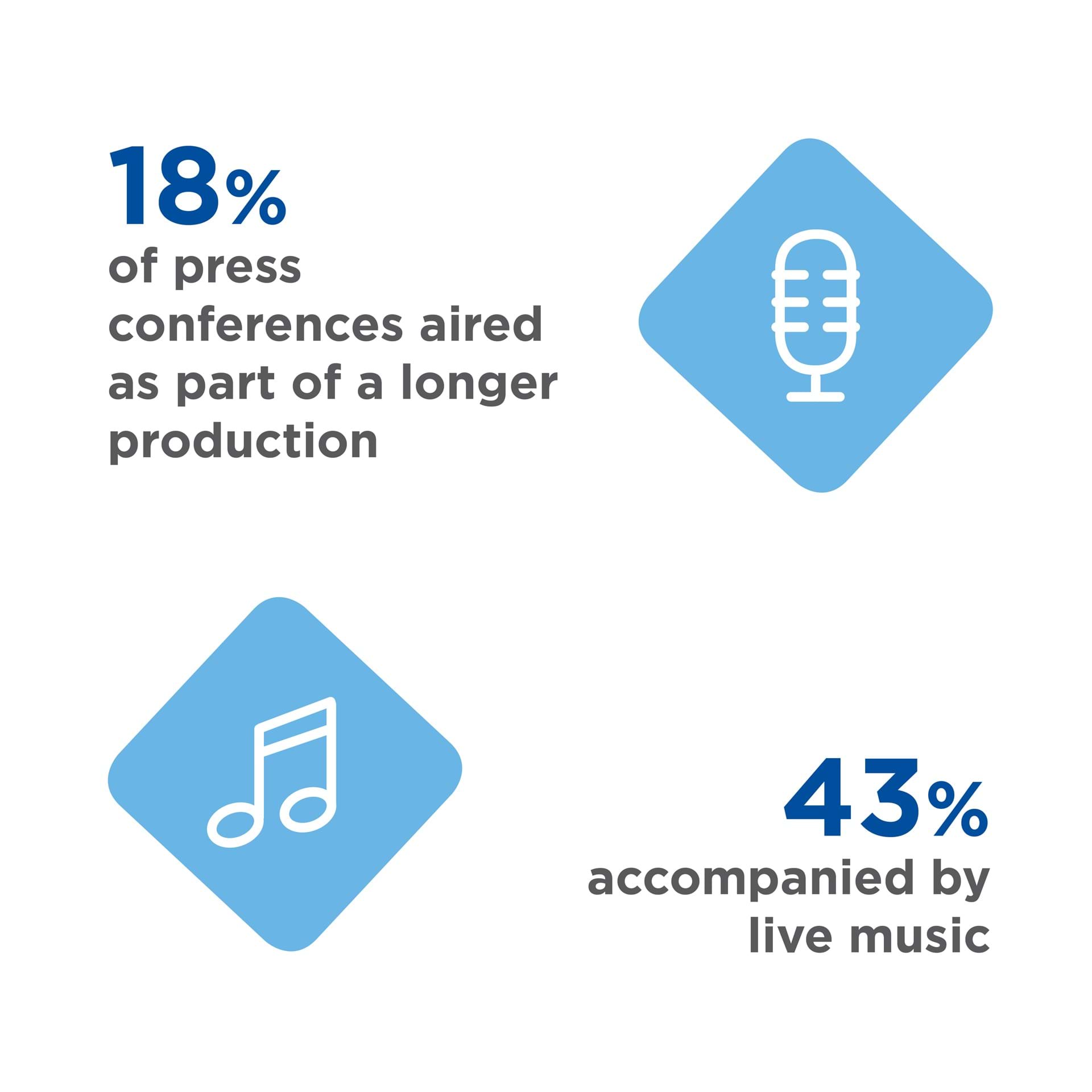 The Future Of Livestreaming in Automotive Communications

Following Lexus at the Frankfurt Motor Show in September 2017, we expect to see other brands embracing virtual reality press conferences or involving other new technologies  to increase appeal and engagement. In the short-term, we predict a continual increase in scale and production values for the livestreams accompanying motor show press conferences, as brands attempt to find new ways to make an impression on time-poor audiences and boost average viewing figures in the process.